It seems to work after copying rds.* jars to ‘features’ and ‘plugins’ folders. What should be done with ‘artifacts’ and ‘content’ jars? Consider sharing it as a drop-in - it’d be more consistent with other Capella add-ons.

Working on defining a way to model “data transfer” between leaf actions of BTree
For BTree on component level there is no questions.
But for BTree in “atomic” function level I have

In Capella there is three levels of modeling

Functional exchanges hides data transfers. They can contains exchange item elements (in and out).
They are more like “function calls” with input parametes and out parametes. As a result data value transfer are modeled implicitly.

“Data ports” can be used to model each input\outpup parameters used in Funcional Block.

If BTree is defined for atomic function them Functional Exchange is used to “tick” behaviour tree of called function and used to provide input parameters for BTree. It also receives output result of tick (SUCESS, FAILURE, RUNNING) and output parametes of BTree.

Always used it for updates from remote repos, wasn’t sure that you can also install a local stuff

I’d be careful here as it might lead to some misunderstanding regarding implementation of such function with functional blocks. Especially regarding data visibility/scope/encapsulation and its exchange mechanism. If atomic function is implemented as a procedure, function or method, how its functional blocks and data exchange between them should be implemented? Functional blocks seems to be closer to some design stage, thus a bit out of the scope of Arcadia methodology.

Arcadia and Capella already provide some concepts for modelling data that go way further but integrate well with functional exchanges. You may want to check the thematic highlight about Interfaces and Data modelling in the Capella Help.

using only ports (no variables) 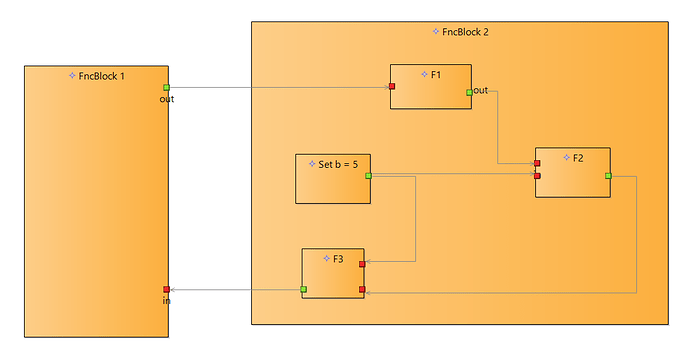 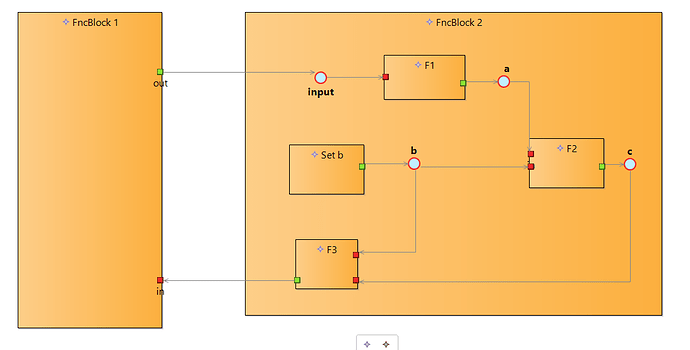 Data ports and variables can be typed by Capella classes.

This diagrams shows only data flows. There is no control flows here.
For contorl flow definition Behaviour Trees or Decision trees could be used.

In case of Behaviour Tree B, F1, F2, F3 will be referenced from leaf actions. 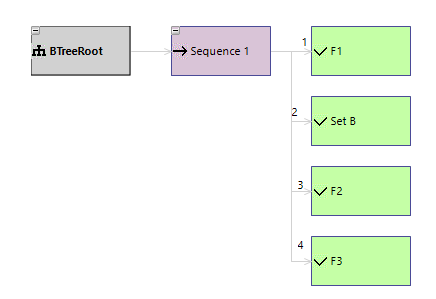 Why use different meta-model for modeling behaviour of atomic functions? 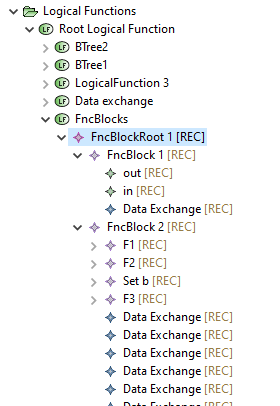 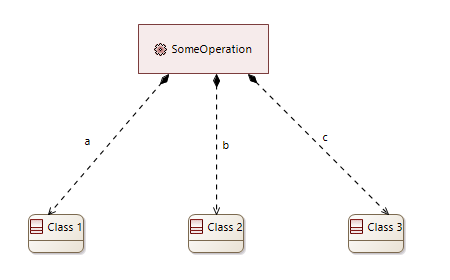 More over functional exchanges with Operation exchange type have control flow semantics but not only data flow.

Functional blocks specify how outputs are calculated and does not contains any control flow semantics. 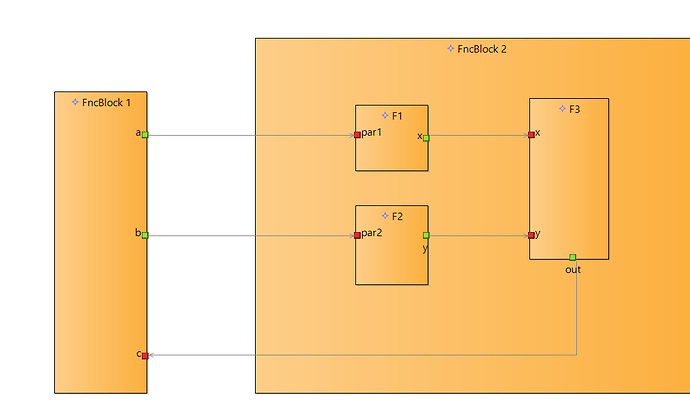 More over functional exchanges with Operation exchange type have control flow semantics but not only data flow.

Not sure I understand well. But what is for sure is that functional exchanges in Arcadia represent dependencies between functions in terms of what is exchanged (data, mass, energy) and not control flows.

Your FcnBlocks remind me the Function Blocks defined by IEC 61499 standard:

This is clearly out of the scope of Arcadia, which doesn’t address the detailed definition of leaf functions behaviour.

I would suggest to create a new forum thread on this topic, and to differentiate the BTree (which can be useful without introducing this level of detail) and these FcBlcks (which could be useful indepenently of the BTrees).

I think Functional blocks are similar to blocks from IEC 61499.

FunctionalBlocks can be used without BTree. I even created another viewpoint for their definition. I will create another topic on modeling atomic functions using functional blocks.

But BTree can be used to modeling control flow of functional blocks inside atomic functions. From this point of view they are connected.

There are 4 main use cases for BTree usage

Functional blocks can also also connected with ComplexValues in some way and my ComplexValue viewpoint I’ve created to define mappings between ComplexValues.

Hi In fact “value” elements are the right choice to model values in Capella. It’s analog to “slots” in UML. Although they are not “user friendly” Capella meta-model for complex values is designed quite well and can be used as is. Yes there is no needed Capella tools to work with this meta-model: tables, diagrams and so on. I had an experience in using complex values to specify mappings between different data models in IT integration projects. For this task a new viepoint with several tools…

There is another notation where Functional Blocks is used. See xod.io
It’ a visual tool used to create programs for Arduino, ESP8266, ESP32.

In this tool data flows and control flows are modeled on the same diagram.
To model control flows (ticks) diferent type of exchanges are used. (in parallel with data flows) 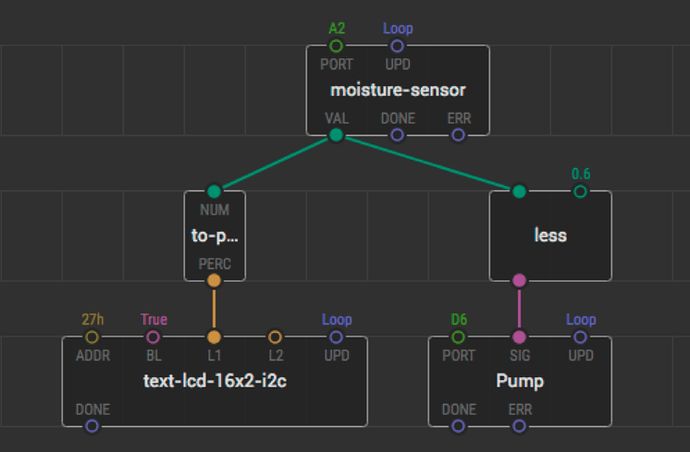 In more detail execution model of XOD is described here

Input\output pins are implemented over Blackboard by using the same name for ports.
Also Blackboard value can be set or read by any leaf function.

I will try to explain by examples what I want to see on FncBlocks diagram Let look at some functional block that should calculate output based on input output = FncBlock2 (input) a = f1 (input) b = 5 c = f2(a, b) output = (c, b) using only ports (no variables) [image] using “variables” (or data objects betwee functions) [image] using variables and variable references [image] Data ports and variables can be typed by Capella classes.

When Behaviour Tree is used with atomic functions data flows between functions are modeled by functional exchanges. Input\output pins send\receive not individual data but ExchangeItems that contains individial data that is called ExchangeItem Element.

On the diagram below functional blocks are shown inside it’s parent atomic function.

In this diagram internal parts of the input port for atomic function is shown as 3 level port.
FunctionInputPort -> ExchangeItem -> ExchangeItemElement

Ports on the third level is typed by Classes and have directions (red - input, gree - output) 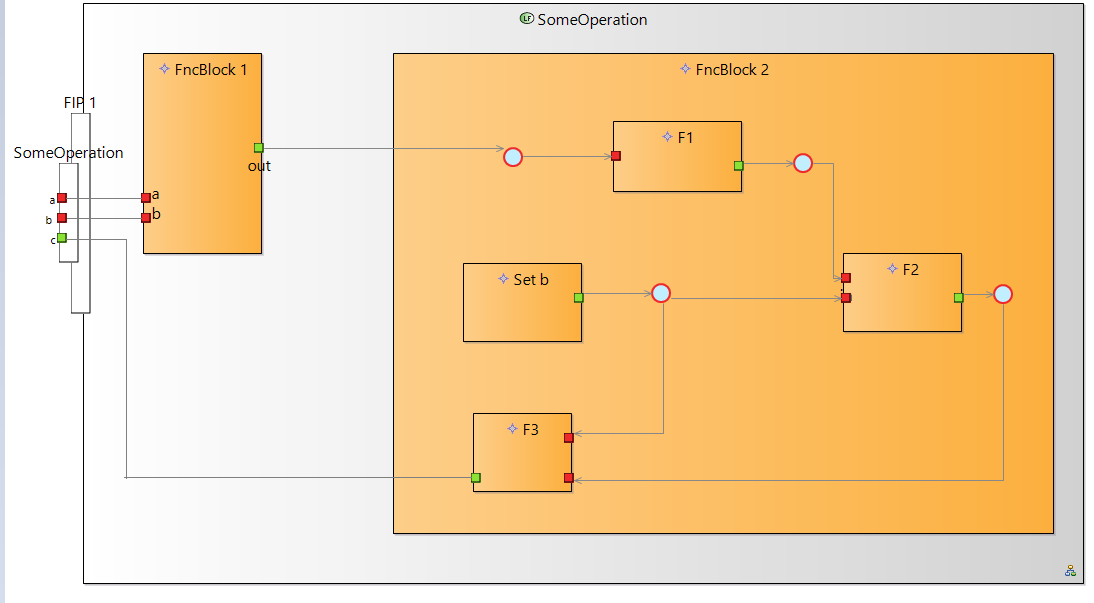 Below is the demonstration of detailed behaviour specification for atomic functions.
Functional Blocks and Behaviour Tree are used for this specification.

Root FunctionalBlock is created inside the atomic function.
Behaviour Tree is created Inside the root functions block.

Control flow for atomic function is defined using Behaviour Tree
While BTree is created sub FunclBlocks are added to the root Functional Block.
FncBlocks can be grouped into any hierarchy and don’t depends on structure of BTree nodes.

When diagram is created root FncBlock is shown automatically. On the border of the root functional block input and output ports of parent atomic function are shownn. For functional ports detailed structure is shown based on exchangeItems and exchangeItemElements specified for ports.
This ports are used for mapping (via delegate) between elements of functional ports data ports of sub FuncBlocks. 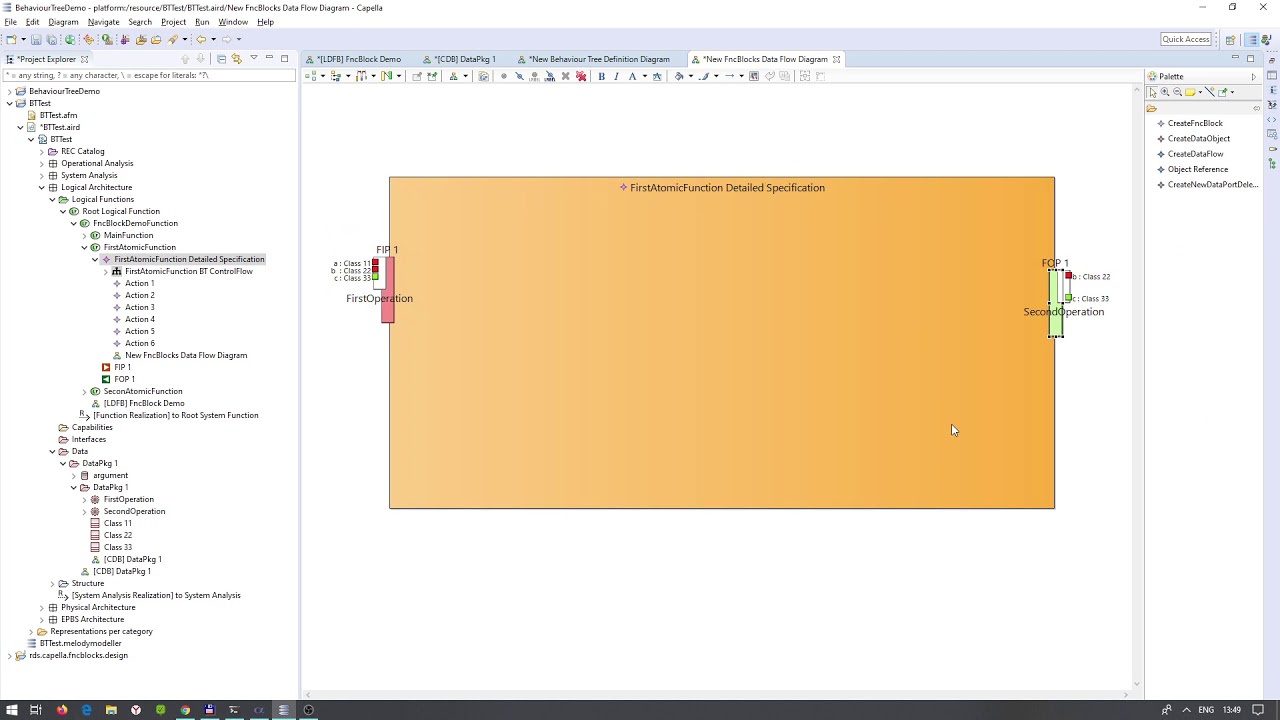 As mentioned, functional blocks as presented are part of design/implementation, not architecture anymore. Did you generate some code out of this or just defined internal structure of an atomic functions and later coded it by hand? If I had to define internal structure, I’d prefer to generate the code instead of redoing textual implementation, which means we’re close to implement some open source Simulink equivalent

The notation of functional blocks is also a little bit troubling to me as both FncBlocks, F1 and F2 are just normal functions, so they shall exist somewhere in a functional decomposition. Just F3 is some abstract code element, also ‘b’ constant can’t be modelled as it’s not a function:

And some details of allocated exchange items/elements can be specified on interface level.

Nevertheless, your last video is very interesting, just a use case is not so clear yet, e.g. what should be the relation between actions and functions?

As mentioned, functional blocks as presented are part of design/implementation, not architecture anymore.

Did you generate some code out of this or just defined internal structure of an atomic functions and later coded it by hand?

This FuncBlock notation is 2 days old. So not yet )

The notation of functional blocks is also a little bit troubling to me as both FncBlocks, F1 and F2 are just normal functions, so they shall exist somewhere in a functional decomposition.

Let’s look at an example from software engineering.
Take class A and define several functions inside this class. And define main function that implements control flow (business logic of this class) and execute other class’ functions in some sequences.

All of this function when executed also implements some control flow (but more technical one) : analyze input parametes, prepare parameters for external functions, calls external function, analyze results, create objects based on results and so on. I named this actions as functional blocks.
We don’t want to know about them in the main control flow (busines logic). We don’t want to subdivide functions defined in class.

In case of Capella modeling we want to have class functions to be atomic functions in functional decomposition. And used them in statechart\behaviour tree defined for component.

just a use case is not so clear yet, e.g. what should be the relation between actions and functions?

In IT projects there are a lot of “technical” work and logic inside atomic functions. Data are prepared, services are called, mapping between different strutures are made. In our case software implementation was done by several subcontractors. They had not very good understanding of data architecture in our system. We needed to define a lot of mappings for atomic functions:
between input data and called services, services results and atomic function resul and so on.

I’ve created special viewpoint to define these mappings (ComplexValue Viewpoint). Aftre mappings are defined we needed some way to define control\data flow inside atomic functions and “attach” these mappings to blocks of this flow. We did decomposed atomic functions into functional blocks as part of functional decomposition and attached mapping to leaf small functions. I don’t think this is a good aproach as “business logic” mix with “technical logic”.

Meta model used for functional decomposition is not good for defining internal behaviour of atomic functions. This meta model was not designed for FunctionalBlock level.

On this level one block calculates some variable and some other block use it. We don’t want to define ExhangeItems and pack data into it to “transfer” data to the other block. We want to define simple data exchange typed by data type we are transfering.

It’s normal to pack data into “signatures” and interfaces on the atomic function level. But it’s not good to model data transfer between two blocks of code inside one atomic function.

e.g. what should be the relation between actions and functions?