Why then we still don’t have proper open source BTrees modeling tool available yet??

I’ve known about this notation only this autumn

In fact there is quite a lot of editor for BTrees

Also there are a lot of BTree code libraries for different languages.

But editor for BT is only a part solution (I could compare it to BPMN tools) that does not provide full solution for system design as Capella do.

So here I see clear advantage of BTrees notation.

Great! and thanks for your comparison wit flowcharts.

I also had quite a lot of experience when I tried to model reactive behaviour in Capella using only functional decomposition. (without statecharts). Statecharts are great in this but add additional level of complexity to modeling.

Have you tried to introduce sequence links to your Functional Chain?

One great thing of Capella is that you can extend it to support other modelling representations and practices. And if you find that BT can be integrated, go on!

My suggestions are only to think about how BT could be integrated and still be “compatible” to the Arcadia method that is the one that is implemented in Capella.

Perfect!
And it’s what I am trying to understand: How to use new and stay compatible!

PS: I agree with the comment of @kubsztal, Arcadia is for architecting and not for defining detailed behavior: achitecting is already a major responsibility, especially in complex systems engineering!

I would say that detailed behaviour need to be defined on any level of system design. Only “atomic” functions would be different in scale.

Statecharts are great in this but add additional level of complexity to modeling.

I’m not really sure here. FSMs can be quite complex leading to some “spaghetti” design, this is why HSMs has been introduced. How would you design e.g. following state machine as BTrees notation, as additional complexity you can add some guards and actions to every transition, plus some /entry, /do and /exit actions to every state and maybe some deep history to S2 too (then you also need s212 additionally 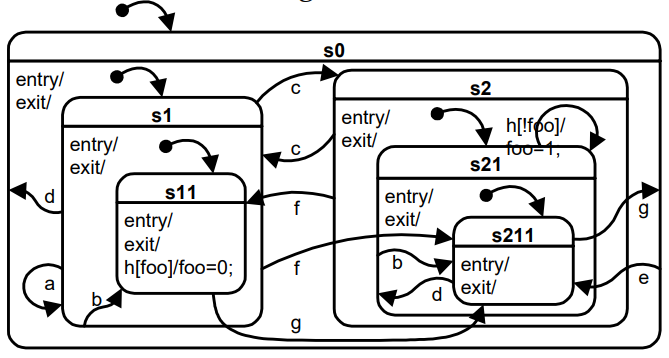 As I understand control flows should not be used on data flow diagrams.
I undestand this approach as mixing control and data flow results in spagetti diagrams. 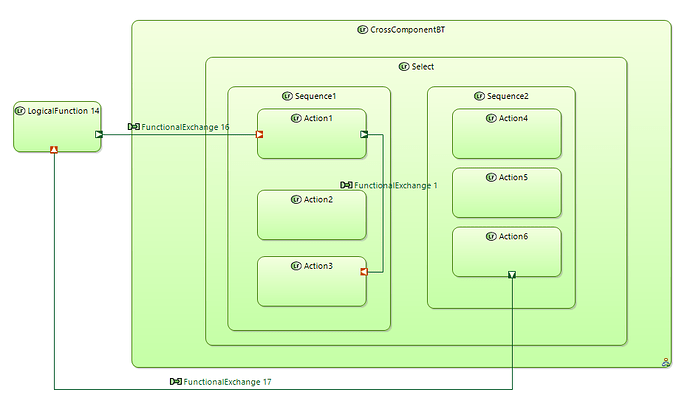 and functional exchanges are used only for data flows

I’m not really sure here. FSMs can be quite complex leading to some “spaghetti” design, this is why HSMs has been introduced.

By the complexity I meant here not FSM\HSM notation. It’s another question.
I meant here that for defining behaviour you need two hierarchy “functional” and statechart and update them in parallel. With BTree you use only one - functional hierarchy. It’s much easier.

I will create BTree for this statechart for example

Using only sequence links on functional chain makes it impossible to visualize on architecture diagram AFAIK?

Great, thank you! Somehow I missed this solution.

This is a design choice in Arcadia (and hence Capella). You may want to check this: http://download.polarsys.org/capella/publis/INCOSE_Capella_SysML_paper.pdf

What you consider “complexity in usage”… is that there is an order to perform tasks (which is defined by Arcadia) and that drives the engineer step by step into defining the architecture, which in fact diminishes his usage complexity. But when you want to do different tasks, or want to do tasks in ways that are not those that are supported by the method and the tool, well, it becomes a little bit more complex

That’s why you can extend Capella to new practices.

Before creating BTree for mode complex statechart decided to update PingPong statechart with entry\exit\do actions and some additional details.

Let’ start to analyze BTree in below to up sequence and look at BTree part for Pong state.
Based on this state we can understand standard structure for low levels states processing using BTrees.

First sequence contains all step executed in Pong state. It starts when Pong state is transitioned to from some other state and ends with SUCCESS when Pong state is leaving for some other state.
Execution starts from condition checking (state == Working\Pong). After that entry, do, exit actions are executed. After exit action the reason of the leaving is analyzed and on transition actions are executed, and new stated is set.

In state (do) action is executed asynchronously with a ReactiveSelect node. This node checks several conditions and if they all returns FAILURE sends tick to the “in state action” (grey one). “In state action” starts executing asynchronously and after start returns RUNNING result to the ReactiveSelect node. It also returns RUNNING to the parent sequence and so on. If some condition returns SUCCES to ReactiveSelect then it stops execution and returns SUCCESS to the parent Sequence. After that next child of parent Sequence is executed. Finish condition is a way to stop Pong executions from parent BTree, for example on some event that is handled by high level states.

Actions on transitions are executed using Select for exit reason function. It has two sub functions: sequences for evPong and evStop events. For example if evPing event is received transition action for evPing event is executed. Aftre that new_state is set to Working\Ping state.

if function Select for exit reason returns SUCCESS last function in Sequence is executed: set event = NULL. It means that event was handled.

On the first BTree tick the following sequence of nodes are executed:

after their execution RUNNING result is ruturned to the parent node (starting from 1.3.4 to 1.3 to 1.)

after their execution RUNNING result is ruturned to the parent node
and so on until some condition check inside ReactiveSelect not return SUCCESS result.

What you consider “complexity in usage”… is that there is an order to perform tasks (which is defined by Arcadia) and that drives the engineer step by step into defining the architecture, which in fact diminishes his usage complexity. But when you want to do different tasks, or want to do tasks in ways that are not those that are supported by the method and the tool, well, it becomes a little bit more complex

That’s why you can extend Capella to new practices.

You are absolutely right. Capella supports (automates) Arcadia method. If some another method is used another set of automation is needed.

We can see that statemachine representation is much more compact even for one state (Pong in the previous post example).

Below is DSL based representation of the same part of BTree. 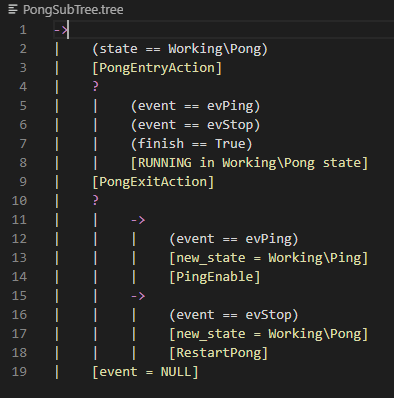 There is no possibility to show control flows on data flow diagrams. Only on Architecture Blank diagrams.

Somethink like functional scenarios and Functional chains are nedded to visualize BTree execution scenarios like this one.

It’s not possible to use stanard Capella tools to show the same information now.
I think that functional scenarios and functional chain diagrams could be specialized by viewpoint to show calls based on parent-child relationships.

On the same principle new edge type can be added to functional chains diagram to show parent\child relationship between functions. In this example I use sequence link to show call between parents and childs. Also information about execution result should be added to functions involvements. 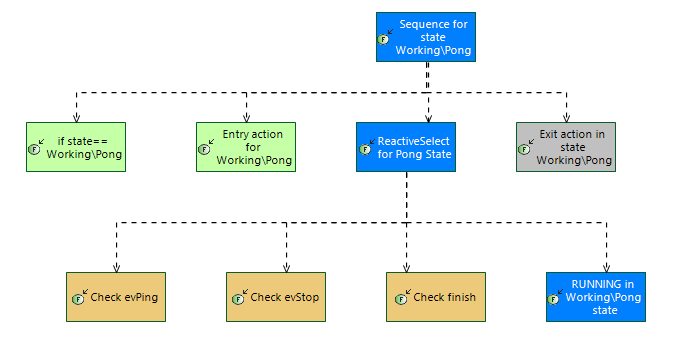 Information from such functional chains could be overlayed on functional breakdown diagrams like in this example: 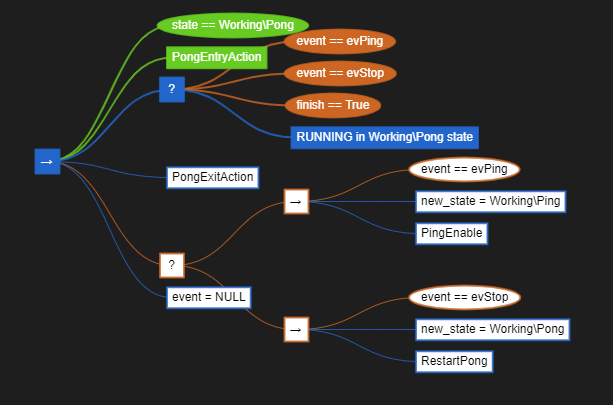 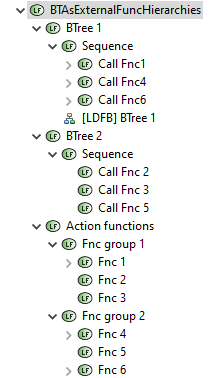 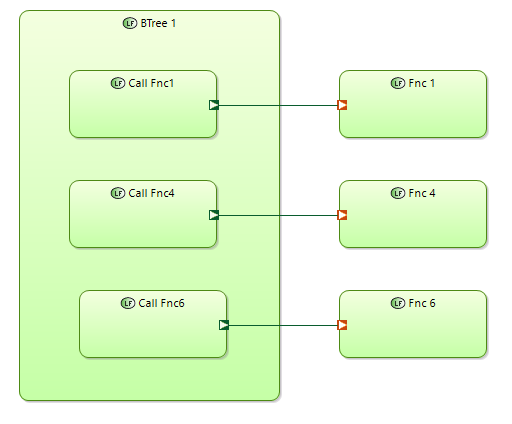 Leaf-functions of BTree and atomic functions of clear functional decomposition could be allocated to different components. 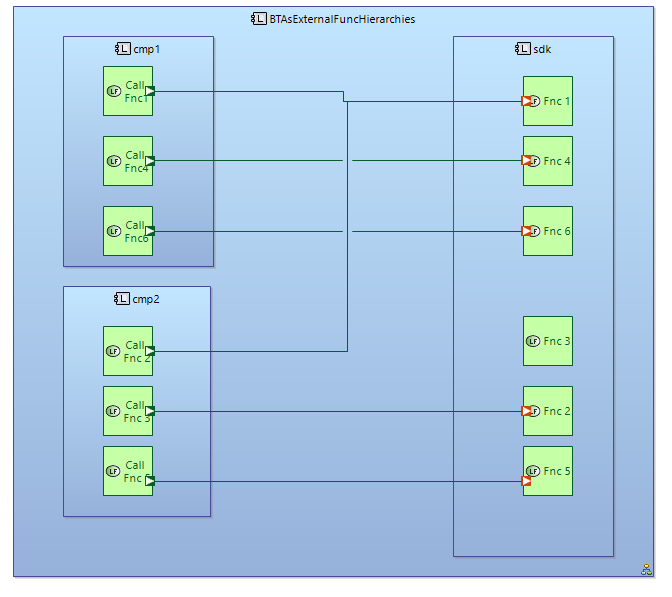 Groups from clear functional hierarchy and from BTrees can be visualized on Architecture blank diagrams.

After exit action the reason of the leaving is analyzed and on transition actions are executed, and new stated is set.

This will only work in case of no guards.

If then flowchart < BTree < HSM is true and Capella provides mode/state machines notation, what would be the benefit of having BTrees? Perhaps figures 2.3 and 2.4 in https://arxiv.org/pdf/1709.00084.pdf are the answer here, but I’m not so sure if this HSM couldn’t be designed in a bit more compact way, e.g. ‘choice’ and ‘event guards’ could be used to simplify transitions from all states to all states on given state event, preventing such “spaghetti of transitions”: 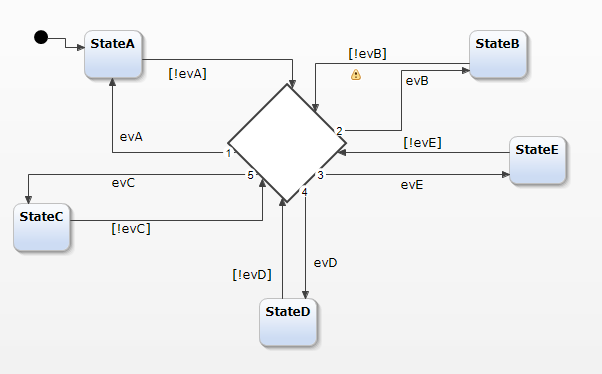 If then flowchart < BTree < HSM is true and Capella provides mode/state machines notation, what would be the benefit of having BTrees?

I think we need to differentiate between visual notations and model structure. By model I mean element’s structure that we see in model browser.

Disadvantages when using HSM from model structure point of view

Advantages of BTree from model structure point of view

I see several possible ways how to reuse BTrees in Capella

In BTree notation it is possible to include into BTree another BTrees by reference. Included BTrees are activated by ticks received from the parent BTree. In other words parent and child BTree control flows are connected. At the same time leaf-functions of BTrees could be connected via data flows.

This appoach is compatible with other model parts\representaions in Capella. 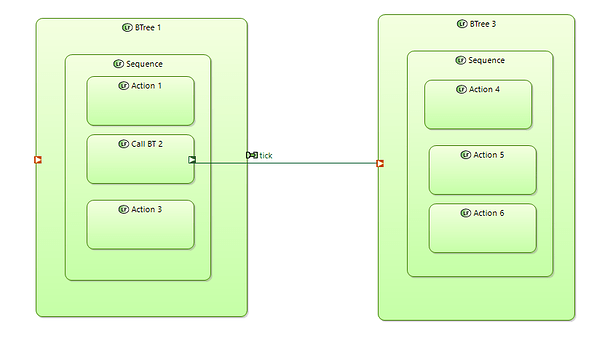 Reusable BTrees can be duplicated via REC\RPC mechanism as stand alone BTrees (without physical inclusion into parent BTree). In many cases you will need several instances of BTree to be able to connect leaf functions of different instances with different external functions. In this case such an approach can be used.