Hello together,
thank you in advance for your help

.
Yet I do not understand what is the difference between Node PC and Behavior PC in the Physical Architecture and I hope you could give me a helping hand.

For example I have a component “User Interface” which consists of two buttons and 2 LEDs.
Each button and LED is a node but what is the behavior component?
Is this already to deep as physical component?
The behavior of an LED is to emit light in general. But one shall fulfill together with software the function to signal a “RUNNING” State and another an “ERROR” State.
So the pysical behavior is not equal to the functional fullfillment…
So how do i identify the Behavior PC to a Node PC?

I find it also difficult to see the differences in PC’s.

This is what I have found on the internet:
Behavior PC’s are carrying out the functions/subsystems.
Node PC’s provides structural support to components.

In your case: The LED and button are the behaviour PC’s and the panel where the button and LED are mounted is the Node PC? 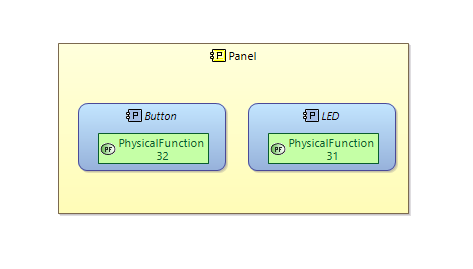 I do not know if this is a correct way of thinking.
If someone else have a more in depth explanation, I am also interested.

And maybe you can add extra Node PC’s like led mount and button mount to make your model more in detail.

Okay thanks a lot.
I like the mentioned definition. Searched now a while for a straight forward definition. Thats the first which makes somehow sense for me

Not quite. A Node PC has no functions – at least none that you are trying to model, so does not exhibit behaviour. For example, in @RSE’s model above the Node PC is the Panel. The Panel is what you intend to insert your Behavior PCs into, in this case a button and an LED (the Behavior PCs). The Behavior PCs are what implement the functions (PF) in your architectural design.

May be think of it this way. If you modelled a software service it would be represented by a Behavior PC into which you would insert Physical Functions. For the software service to execute it would need an operating system and either a desktop PC or a server, these you might model as Node PCs. They merely provide the resources for your service to run.

Thank you very much for the explanation.
So it is more a “casing” which contains the Behavior PCs and which builds the Interface to the world beyond it?