Behind this is the way of building the use phases of the system from states of the actors, (coming may be from OEs), then name modes to support, then cascade modes to LC and PC behaviors, and then support PCB modes by Nodes states.

Life phase would be represented by states.

There is an additional point: we should have a chance to convert states to variants or more often variants to states… variants that I mention at the moment by PV and PVGs

(My future system is from user (in fact a crew of several) point of view level 3 component)
I will follow this process, but at the moment I did not find any automated link to do so, only reuse triggers and guards in transition is available.

Thanks for any information

Hi Thierry,
Not answering your question, but related to the Mode and States topic in Capella: https://www.youtube.com/watch?v=74eKWrSs8hI
All the best,

Not sure about the “cascade” your considering.

If transitions between engineering phases, the transition of state machines isn’t included by default. However, you can add this using preferences 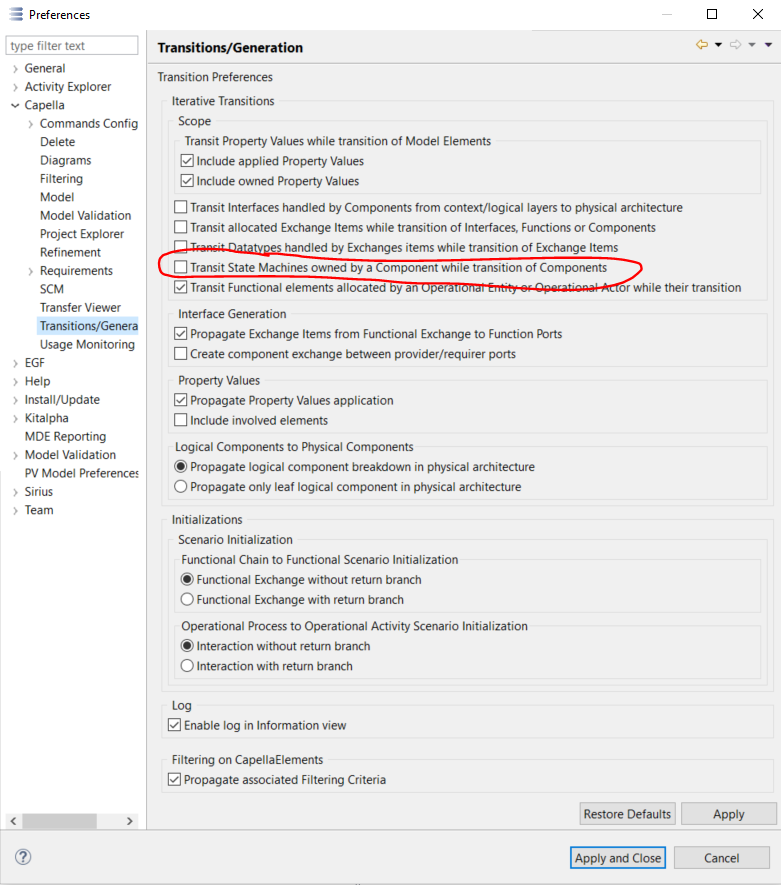 If transition using the System to Subsystem addon, state machines should be transitionned.

Hi Samuel
This a part of the answer only: to me state design is a important part of system engineering. In my project, during operational analysis, I had to describe super-system behavior, and then co-systems within it and overall context items. So I have numberous OE (68), probably way beyond reasonable, distributed in 4 levels and my future system is one of the level 3, but shall control level 4
I raised for each and even for overall context a state machine, where states are material states (technical for engineering items, or physical for natural ones- there are some).
To go to system analysis, I will reduce the number of actors by consolidating thoses which have reduced or no contact to system in direct actors. This will enable reducing scenario complexity and even number, removing the ones without system action.
My parent OE have in each state a region for each child OE, owning a final state named after requested state for this child during the parent state. Sometimes a complete machine runs there with an initial and several regular states.
Then I raised for the child the machine corresponding to what was described in parent machine.
Now I have to consolidate for system actors their state machine.
Then, I will raise the system use cycle by combining actor state machines: each actor would have a region in each state (use phase) in which will be a final state to describe. The main state represents a use phase during which requirements are active. Then I will define a mode to support this phase. For each mode, I will check what are required FEs, in and out, and then using needed FE during each phase, using possible mutualisation between subfunctions, I will set up LCs in the system and give LF allocations. Then I will need to define required mode during each system mode: same principle than during OA, regions at system level owning submodes for LC, that I hand copy to LC mode machine…
Same principle to PC Behavior if I have to divide to deploy in nodes. Then Nodes should have technical states to support modes. At this point comes the question of may be reintegrate variants in states, to reduce diversity, or convert states never visited by some users to variants…
At the moment, no link exists between states and modes parent to children, but only between engineering layers
If I transfer OE to actor only I will never make actors realizing several OEs, owned state machine will follow without change… and I would like to avoid just ignore distant OEs or even worse delete them from model to avoid warnings of having non realized OEs, and I’m not sure that the state machine of the main OE in the actor is sufficient.

Thanks anyway for your suggestion.