How to transform Capella Sample Add-ons into "Effective working Workspaces" in Capella Studio? Without losing any link/info 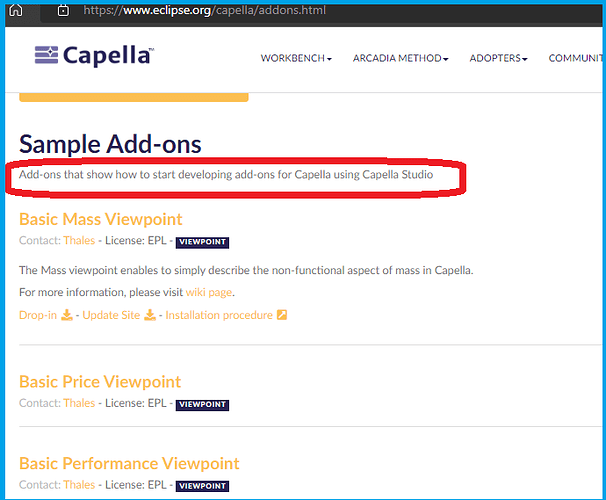 These addons are designed to help start developping on Capella Studio.

So I downloaded the first addon (Basic Mass), unzipped all the .jar files into one folder and opened it with Capella Studio.

One problem encountered would be “not being able to open the Service classes” on Capella Studio, under .Odesign.
I figured it might because of the name of workspace that has been changed, originally(workspace where the addon has been developed first) VS the new workspace (mine).
I provided the error message associated to the issue, here it is: 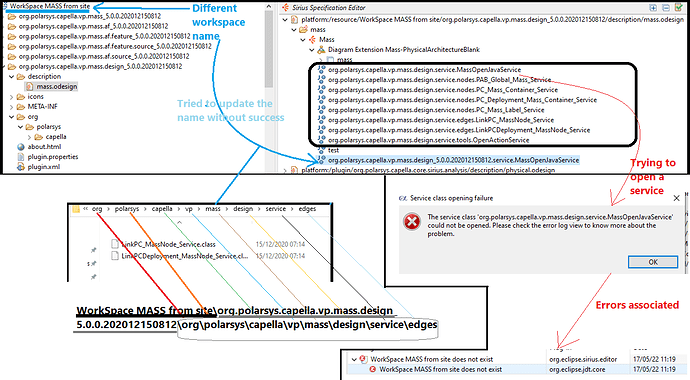 I tried to make a new extension and open it, it has the same error pop up message, So i figured the problem might lay elsewhere.

Other classes.java could not be opened, aswell as the mass.GENMODEL.

What is the best way to open a Sample Add-on in Capella Studio? Was my method consisting on collecting all extacted .jar files good enough?

It seems strange that the imported projects names are the original plugins names with the version added. Would it be possible that it is the cause for the problem ? Maybe you already have the plugins already installed in your Capella Studio install.

Hello Arnaud,
I don’t have these types of error messages anymore.
I had them, before you explained to me how to import properly an addon in the message of last week. Thanks again by the way, i reacted to your response.

It comes to 2 problems as far as I gathered:

I got rid of all of these errors messages thanks.
I will try again, in few days when I have time to use the plugin view method to import an addon, in a protected network to see how that goes.

Ok thanks for the feedback.

On the left the original project, on the right the result of the import.
→ Was this caused because of errors popping up on .odesign and .af? Does this happen anytime any tiny error appear = no migration of the folder?
Error was related to a path, I corrected that, some warnings were presents in the manifest, i used the automatic correction though.
I would have prefered if the behavior or “plug-in viewpoint” was to import everything (with the errors), especially when the errors come from older configurations, but maybe it is best like that.

image1282×441 33.8 KB
I don’t know if that could have been useful to us, and informed us that the errors were related to paths?

Additionally:
The update site I used to get the plugin before importing it, DOES contain all the parts, look: 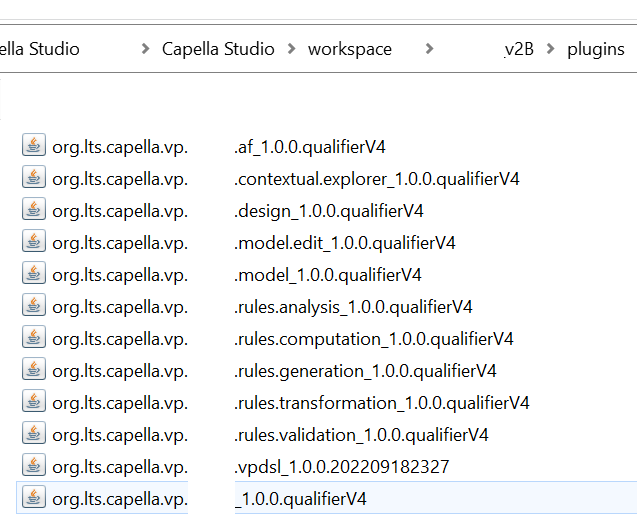 image1256×231 20.4 KB
So these plugins even if they are appear in the update site they will not be installed because of the errors.
1 Like
Copyright © Eclipse Capella, the Eclipse Capella logo, Eclipse and the Eclipse logo are Trademarks of The Eclipse Foundation.